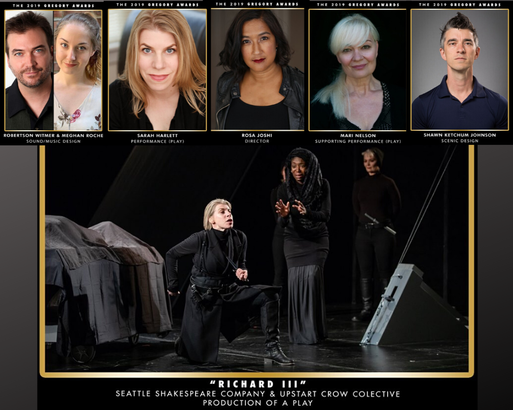 Bleak, sleek and fleet, Rosa Joshi’s staging whips us through Richard’s bloody rise to the English throne, and his precipitous fall from it. The well-synchronized ensemble is led by Sarah Harlett, relishing her turn as a canny villain, this “excellent grand tyrant of Earth.” She exploits every scrap of ironic humor, as Richard gloatingly checkmates all who stand in her way.
- The Seattle Times
​

​Every role — king to servant, dukes and prince — is played by a woman. They take on traditionally male roles and pour skill and passion into every portrayal...Sly and slick, Harlett is a tour de force, pitting people against each other with delight, while callously plotting their demise. Her performance shows the many sides of Richard. From deceit and mendacity to feigned friendliness. From calculating political machinations to sardonic and cackling irony.
Joshi sets a fierce and unrelenting pace in the director’s chair. Thanks to Shawn Ketchum Johnson’s angular set, with its cables and blocks, along with Geoff Korf’s equally innovative lighting design of darkness and shadows, it never lets up. And sound designers Meghan Roche and Robertson Witmer have amplified the cables to mimic a giant stringed instrument, creating an eerie atmosphere that welcomes intrigue, battle and murder.
- Queen Ann News

Richard III is a dazzling theater tour de force with bold and superbly inventive staging by Ms Joshi as well as clever and innovative design and a superb ensemble of female actors led by Ms Hartlett’s deliciously complicated performance as the villainous Richard. It’s a ripe and passionate night of theater bravado....The opening itself is a stunner with Richard being physically manipulated by the other actors, like a puppet and emphasizing Richard’s famous physical deformities (a twisted spine/hump and crippled arm). There’s also a splendid through line of the staging of the executions with choreographed movements and the use of stage rigging and lighting cues.
- Seattle Gay Scene
​

BRING DOWN THE HOUSE

Opportunities for fierce femmes to collaborate in the theater are deeply needed. Upstart crow collective’s willingness to break gender codes evidences the revolutionary potential of more inclusive casting…. Bring Down the House naturally prompts the audience to question their own gendered assumptions around power, control, and leadership...The work of movement director Alice Gosti, the visionary directing of Rosa Joshi, and the abstract scenic design of Shawn Ketchum Johnson weave together to produce a piece of reimagined classic theater that drips with intrigue.
- Seattle Weekly
​
Joshi’s abridged, lively staging makes its own case. Visually stark, it ingeniously employs high-backed chairs and Geoff Korf’s pinpoint lighting to zip us through animated choruses of exposition, and many shard-sharp scenes
....The large, tight, acting ensemble doesn’t miss a beat as they rip along.
- The Seattle Times
Wisniewski’s stone cold bravado makes Margaret’s commanding leadership feel authentic and cruelly terrifying as she crosses lines of decency that transcend gender....[Schwartz’s] Henry VI radiates a kind-hearted innocence that’s alien to all the power-hungry souls around him. He’s not quite a simpleton, but in every wide-eyed, bewildered look that flashes across Schwartz’s face there’s a sense that he’s in helplessly over his head....The inclusion of Japanese taiko drumming as an undercurrent throughout the production adds a sense of building tension to the proceedings ....the thundering rumble makes it feel like there’s always dread lurking ominously on the horizon.
- Seattle Met
Bring Down The House was recently featured on Howlround in an article by Erin Murray. Read the full text here: Gender Bending Power ~  Bring Down The House
​

It's the performers that need to bring it all home and bring it they do. Gottberg is delicious as the duplicitous Queen Tamora .... Joyner is heartbreaking as the destroyed Lavinia. But the most outstanding roles of the evening had to come from Thone as the aging Titus and Nike Imoru as the Queen's Moore lover and partner in crime, Aaron. Thone gives her usual 110% in the role and turns in an incredible character arc as she devolves from conquering hero to revenge obsessed madman.... And Imoru takes evil scheming to a whole new level as her portrayal of Aaron goes beyond the scheme and into a realm of pure treachery. And with her strength and presence she infuses into the character you cannot help but be mesmerized by it. An entrancing and beautiful show (as beautiful as a show about rape and murder can be), this production of "Titus Andronicus" is one not to be missed and not just for some badass women taking on male archetypes but for an all  around solid production. So I guess what I'm saying is, Come for the badass women, stay for the power of the production.
--- Broadway World
The Seattle troupe upstart crow has mounted a second all-women version of a William Shakespeare play. And in pursuit of beefy roles usually denied to females, they're not taking an easy way out. They've bulked up for the Shakespearean equivalent of a slasher movie: "Titus Andronicus." And they don't stint on the stage gore or the sheer horror or the bleak humor therein.   Rosa Joshi's mounting at the Lee Center for the Arts (on the Seattle University campus) is for the most part riveting, cogent — and not a constant reminder that those are women in male masquerade, doing the murdering, raping, cannibalizing and other barbarous deeds in an orgy of blood, lust and
bloodlust.
-- Seattle Times
Choosing to use an all female cast allows sixteen immensely talented performers to have roles in a play that normally only requires two women.....Amy Thone provides the play’s foundation as a stirring Titus.... It is remarkable that such skillfully produced Shakespeare is available in this convenient venue. The upstart crow collective presented a successful King John in 2006.   Here’s hoping we won’t have to wait so long for their next project.
-- Drama in the Hood

.....this remarkable ensemble is a flawless unit.  Amy Thone [ ] gives a cerebral performance that is equal parts bumbling, confident, and heartbreaking. Thone's passion for Shakespeare is apparent from start to finish.  She walks a fine line between sympathetic and loathsome. This is a master artist at her best.....Kritch is a maniacal wonder.  She executes everything with a fiery gusto that is a sight to behold.....[Peggy Gannon's] finely crafted monologues highlight a performance full of unrelenting fire.  Betsy Schwartz is a shinning centerpiece as the King's helpless nephew Arthur. Schwartz is absolutely heartbreaking to watch....From top to bottom, this is one the best acting companies in recent memory. It is a pleasure to see such crafted communication. Each actor pours every ounce of their being into roles that would likely be mundane if traditional choices were made. There is an unmistakable uniqueness to every performer that is hard to forget. This is what theatre is and should be.  This King John ranks as one of the most important, entertaining, and inspiring outings on any Seattle stage this year. The presence of this mammoth production will be felt for years to come.  Joshi and company are clearly a force to be reckoned with.
--  Broadway World
upstart crow (named for an epithet once hurled at Shakespeare), have really thought through this text. And they execute their ideas about it with blazing energy. Women play all the roles, but in a camp-free zone. When appearing as court operatives in modern business suits, they're really portraying men, not parodying them [.....] And if this is the standard of classical work Joshi and company are capable of then bring them on again. Soon.
---   Seattle Times
...this all female cast makes a convincing team that tears up the stage... they listen and react with precision bent on clarity above all else in telling this unfamiliar tale.
--The Stranger
Joining Seattle's abundance of female talent for classical repertory with the contemporary relevance of King John results in a more perfect union. Joshi's production is a knockout...
-- Seattle Weekly